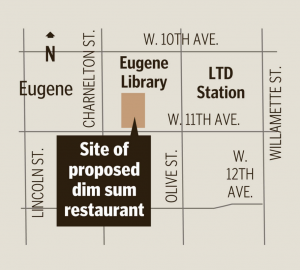 A long-neglected downtown Eugene building will soon be serving up bite-sized morsels of Chinese cuisine.

Li has been working since early last year to open the restaurant. He put more than $500,000 in a full-scale remodel of the building, and hopes Spice ‘n Steam will be the first in a Chinese restaurant chain.

“The sooner the better,” Li said of the planned opening, adding he doesn’t have a specific date. “Right now I’m hiring for waitresses. I just want to get everybody trained more properly.”

Li is an immigrant from the Chinese city of Guangzhou who moved to Eugene 10 years ago. His family had operated a restaurant in Guangzhou, formerly called Canton.

He said he has a long-term lease on the West 11th Avenue building, which is owned by Eugene ­investor Ada Lee.

More than 20 Chinese restaurants are spread across Eugene, but few if any offer the dim sum-style dishes Li plans to make. He said the restaurant will employ 20 to 30 people when it opens.

Li said he sees opportunities for customers in a downtown bustling with newer student-oriented housing. The Spice ‘n Steam building is a block north of the Capstone student housing complex, and a block south of the Lane Community College downtown housing complex.

Numerous businesses have come and gone from the building since it was constructed in 1950. Ada Lee, the longtime owner of the property, operated Cathay’s Chinese Restaurant there in the 1950s and 1960s, an architect who represents Li wrote to the city last year. Lee owns more than a dozen properties around Eugene.

But the building, which boasts a 30-foot-high decorative tower, has sat vacant since around 2010, when a tenant began remodeling the building but never opened there, the architect representing Li wrote.

It became a magnet for graffiti artists before Li began remodeling the building.